On the occasion of celebrating the 300th anniversary of Szeged becoming a royal free city, a huge cake-shaped structure was set up in the city center. Inside, a mini cinema was built in one side of the cake, while in the other half interactive digital games were displayed for visitors to play. One of our most defining projects, the Szeged Cake interactive exhibition, was developed for the occasion of Szeged’s 300th anniversary. The temporary building served as an attraction in the heart of the city, with a diameter of 15 meters. The main goal of the exhibition was to present an interactive, exciting program that represented a unique experience to all age groups. We created three Szeged-themed interactive attractions for visitors: an extra-wide touchscreen wall and an interactive table, accompanied by a widescreen historical short film and an image video made by our film studio.

date
2021
client
The Municipality of Szeged, a city with county rights and Móra Ferenc Museum – which is a major cultural center of the region – formed a partnership and were our customers together.
product
extra-widescreen educational short film, interactive wall, city-building game
task
Unity development, filmmaking
availability
temporary exhibition in the city center, “Black House” exhibition hall

date
2021
client
The Municipality of Szeged, a city with county rights and Móra Ferenc Museum – which is a major cultural center of the region – formed a partnership and were our customers together.
product
extra-widescreen educational short film, interactive wall, city-building game
task
Unity development, filmmaking
availability
temporary exhibition in the city center, “Black House” exhibition hall

To implement the touch-sensitive wall, we used special laser and customised touchscreen technologies. With this bespoke solution we are able to make almost any flat surface interactive: we applied the same technique to the project’s 14-square- meter wall. By combining different technologies we managed to create a multifunctional, complex interactive game. To achieve interactivity, we used laser sensor technology that is normally utilised as a security device, but we adopted it for perception purposes. With the help of these sensors, the related information and curiosities appear when the user reaches the various attractions of Szeged.

Furthermore, as we wanted to add something exciting and sensational to the game that brings the “wow-factor” to visitors, we enabled them to interact with their own creations. After on-site scanning our software uses digital image processing to insert the fish, balloons or boats coloured by the visitors into the 3D interactive scene, where the drawing itself comes to life as a 3D object on the screen. This allows visitors to move their own drawing on the interactive surface and take it with them as a postcard when they leave. 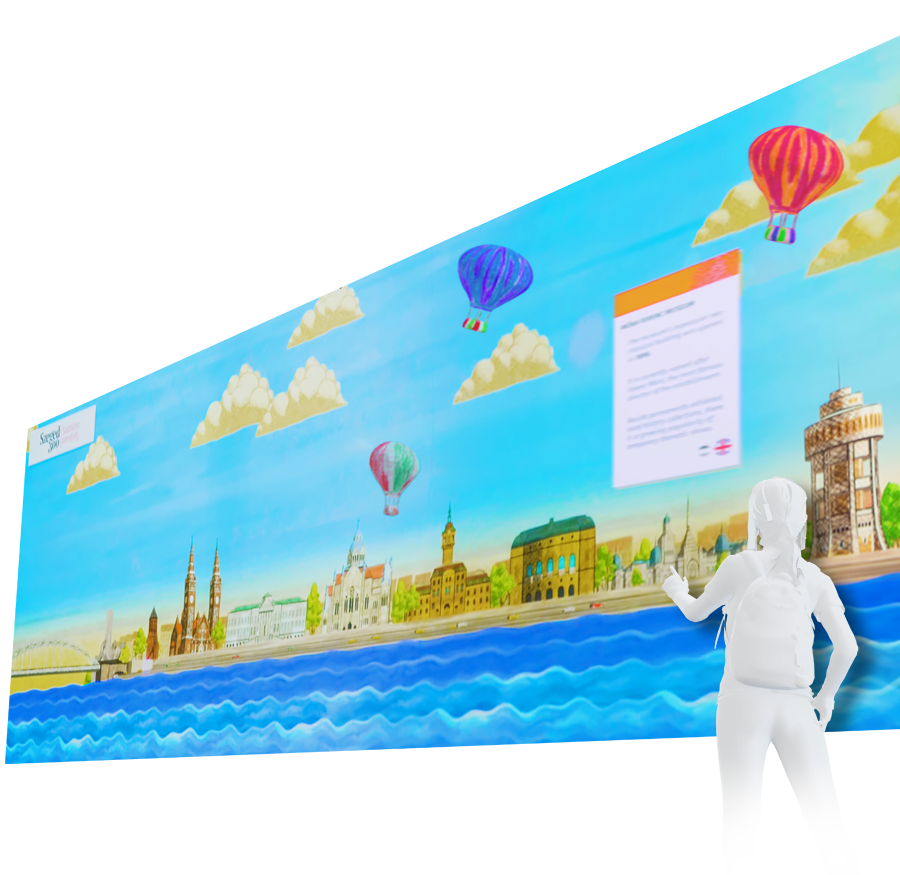 We made a historical and image video about Szeged in accordance with special needs. Thanks to the experts of our film studio, we are able to create films or videos of any kind, which is reflected in the many different techniques used during the process; therefore the extra-wide screen and the extra-high resolution did not cause any problems. We wanted to present Szeged’s history in a linear narrative, from the Turkish occupation to the present day. In addition to the historical storyline, we integrated the parts presenting today’s Szeged with image and touristic elements.

The animations required extreme precision, as every tiny detail could be seen clearly on the extra-wide screen, so there were parts which we were drawing for two weeks. It was a special and uplifting task for us, born and bred Szeged citizens to make such a film, and the finished piece reflects our commitment and dedication. The result is outstanding, as we have created a niche film that helps all Szeged and non-Szeged residents to learn about the city’s history, at the same time offering a great viewing experience to all age groups with its visual and content.

In our city-building game, the processing program we wrote for a special sensor is able to recognize various 3D geometric shapes on a touch-sensitive surface, and we utilised this to build a model city. In this 3D interactive city-building game, we can move Szeged’s iconic buildings, put them in place and create roads across the city. Thanks to our object recognition system, we can move the rails with the triangular objects, the roads with the circular objects and the attractions of Szeged with the rectangular objects.

Due to the location’s characteristics, we had to pay special attention to the projector’s position. Eventually we mirrored the device’s image at a 45-degree angle, thus achieving the appropriate projection distance, and this way the special camera set above the table did not cast a shadow on the surface. We’ve also boosted the game with extra features, such as vehicles moving on the virtual roads built by visitors, simulating an ever-changing route. We can follow both the road construction works and the movement of the buildings on a TV screen, where we can observe the continuously changing and building cityscape in 3D. 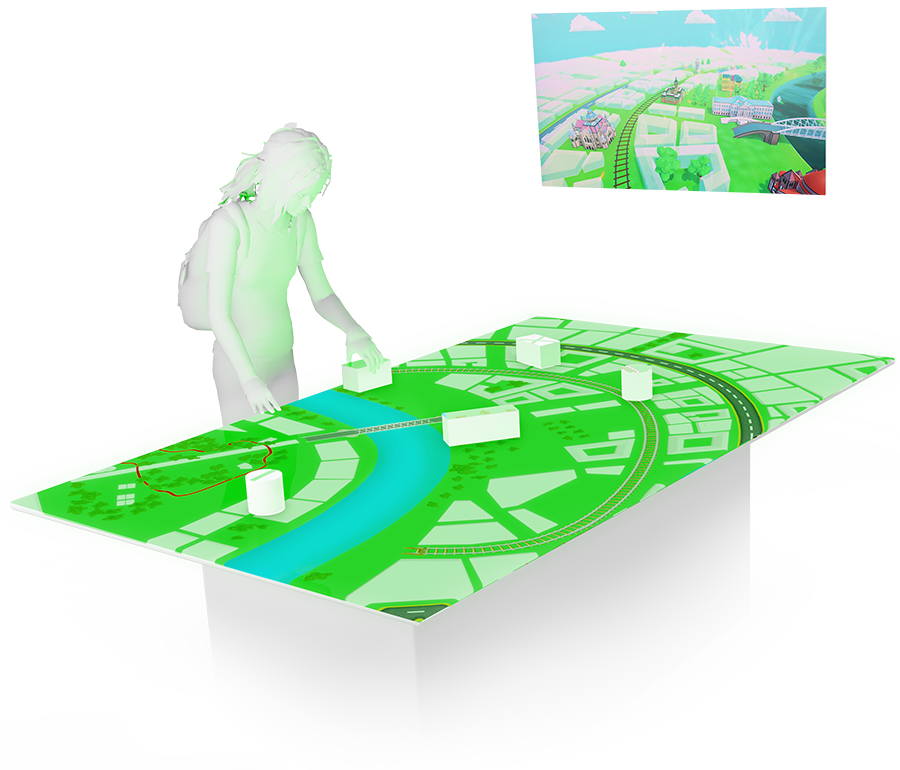